On the 21stSeptember 2019 at Westminster Cathedral JBMS organised a celebratory Mass in honour of the 40thAnniversary of John Bradburne’s death on 5thSept 1979. 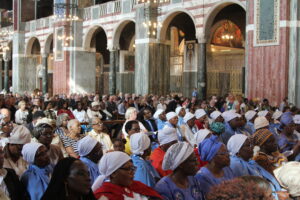 There were over 500 attendees in the Cathedral, which was nearly completely full, with many
Zimbabweans who had flown over especially for the event. You were welcomed into the Cathedral through a walk way of the Zimbabwe Catholic Community England & Wales (ZCCEW) singers, singing beautiful Zimbabwean songs accompanied by drums. Everyone walking into the Cathedral couldn’t stop smiling, their music, praising of God and joy was infectious.

Mass was celebrated by Fr Daniel Humphreys with the homily given by Monsignor Robert Mercer who knew John Bradburne. The juxtaposition of the formal mass and choral singing of the Westminster Choir, with the soulful singing of the Zimbabweans, was a perfect harmony and we all felt John’s presence there. 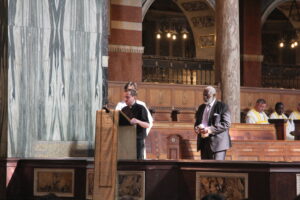 Readings were done by Rev Ben Bradshaw and Benjamin Takavarasha and among the celebrants were      Fr David Harold Barry, close friend of John Bradburne’s, Fr Liam McCarthy OFM, who ran Mutemwa for many years and Fr Alfred Patience Tigere, who currently runs the leprosy centre at Mutemwa

After Mass, people were directed to the Cathedral Hall, where talks were done by Anne Lander, a close friend of John’s whilst he was in Zimbabwe and Professor David Crystal who is an expert on John’s enormous poetry collection.

JBMS, had curated an exhibition of John’s relics for people to see for the first time. In this exhibition, John’s Franciscan habit was on display alongside many of his personal effects, his rosary, watch, books and his beloved typewriter that he h

ad written so many of the thousands of poems on whilst in Africa.

There was a vas

t gathering of the Bradburne family who came to the event from all over the world, some of whom hadn’t met for years.

Thank you to all who were able to attend on the day, we were so thrilled with the amount of people who came to celebrate with us.  Thank you also to our JBMS Team, without their help none of the day’s event would have been possible.

Keep up-to-date by receiving our newsletter:

JBMS Mass, lunch and talks at Buckfast Abbey in Devon

If you’d rather recieve our newsletter via post, please complete and submit the form below.