LEPRA and JBMS Collaboration:
We are pleased to announce that we will be collaborating with Lepra on leprosy work in Zimbabwe. This agreement will allow JBMS and Lepra to develop the Mutemwa Care Centre as a model of best practice in the treatment and care of people affected by leprosy. The aim will be to raise the profile of leprosy in Zimbabwe and help train health workers, patients and their families in the reg 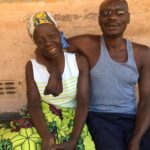 ion in the diagnosis and treatment of the disease.
In August 2019, Lepra sent their experts to Mutemwa to train the health team, patients and the local communities in the practice of self care of affected limbs and prevention and spotting symptoms of leprosy.
Lepra are also helping JBMS get suitable, specialist protective footwear for the patients to prevent further disabilities and facilitate better mobility for the patients. The Lepra team whilst at Mutemwa mapped all the leprosy patients feet to be able to make suitable footwear to stop deterioration of their feet. This will be an ongoing project for a local footwear specialist to be trained up to be able to make specialist footwear not only for the patients at Mutemwa, but throughout Zimbabwe. 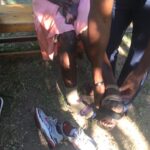 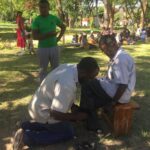 It is hoped that through lepra’s intervention, the Mutemwa Leprosy Care Centre will become a beacon of knowledge for health professionals in Zimbabwe and Southern Africa, so that leprosy may be rendered a disease of no consequence, identified, treated early before any disability arises.

Today, leprosy is considered a disease of the past, however there are still 7 million people worldwide affected by the disease. Leprosy is completely curable if detected in the early stages.
16 million people have been cured of leprosy over the past 20 years, so it is possible that one day the world will be FREE of leprosy.
WHAT IS LEPROSY:
Leprosy is a Neglected Tropical Disease (NTD) which attacks the nerves. The disease is caused by a rod-shaped bacterium known as Mycobacterium leprae.
HOW YOU GET LEPROSY: 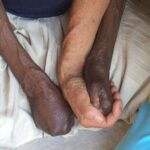 Leprosy is not easily transmitted. It is believed to be transmitted via droplets from the nose and mouth. But unlike other infectious diseases it spreads only with repeated and close contact with the infected person.
SIGNS OF LEPROSY:
The first signs of leprosy are usually a patch of discoloured numb skin. These patches usually appear slowly and do not cause pain or irritation. However, it is important not to simply diagnose from just looking at the skin patches and doctors must examine the patient thoroughly before diagnosing.
HOW IS LEPROSY CURED:
If detected early, leprosy is completely curable through a course of Multi Drug Therapy (MDT), which was first introduced in the 1980’s. MDT is a treatment course that lasts between 6 months to 1 year. MDT is free of charge worldwide, however many people in poverty stricken areas cannot access treatment.
IMPACT OF LEPROSY:
Untreated, leprosy causes long term damage to hands, feet and eyes, leading to paralysis, amputations, ulcers and blindness.
PREJUDICE:
Due to the misunderstanding and lack of information of leprosy, people affected by the disease can be left marginalised, excluded from their communities and experience prejudice.It is not only the physical effects of leprosy which can affect the patients but also the emotional and psychological effect of being shamed by their families and communities, their children being taken away from them and feeling totally isolated. They are separated and marginalised from society making them feel ashamed and worthless. the literal translation of Mutemwa means ‘Cut Off’.
HEALTH EDUCATION:
Communities like Mutemwa are isolated and the community lacks basic health information and support. JBMS alongside Lepra are going to help promote this education of leprosy so one day hopefully, leprosy will be a disease of the past! 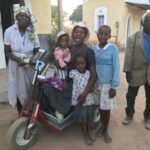 Please make a donation and help us achieve a Leprosy free world.  If you would like more information about Mutemwa or to discuss how you can help further please contact us.