John Bradburne (1921–1979) lived an extraordinary life. He was a reluctant hero of the Second World War, a pilgrim and a hermit, a poet and a musician, a joker and a mystic, and a theologian. After many years travelling and searching, he found the place that God wanted him to be – living alongside men and women suffering with leprosy in Mtemwa, Zimbabwe, a place he helped transform into a community of peace, joy and love. Soon after his arrival, in 1962, he confided to a Franciscan priest that he had three wishes: to serve leprosy patients, to die a martyr, and to be buried in the habit of St Francis.

The single-minded loving care he gave the residents eventually brought him into conflict with the management committee. He refused to put number tags around the patients necks and reduce their already small diet, so he was sacked. He then lived in a prefab tin hut, lacking water and sanitation, just outside the leprosy compound. From there he continued to help the lepers as much as he could.
As a lay member of the Third Order of St Francis, he obeyed its rule, singing the daily office of Our Lady. He lived its hours, rising at dawn for Matins and ending the day with Vespers and Compline. This discipline provides the context for many poems written at the turning-points of the day.

Then, during the civil war of 1979, John was kidnapped and murdered. Since his martyrdom, word of his life has spread around the world, and miracles have occurred in association with his name.

Now forty years after John’s death, John Bradburne is perhaps more alive than ever before. Devoted followers travel in their thousands in pilgrimages around the 5th September each year, to spend time at Mutemwa and climb Mount Chigona where John lived with the leprosy patients.

As the pilgrimages continued, a call was slowly heard for the Church to recognise John in a more official way. John’s own wish was for people to “Pray for my sanctification, because it would encourage so many souls if such a wreckage might come to canonisation”. In death as in life, he wanted recognition not for his own sake, but for the sake of others.

The campaign for John’s beatification is well underway and the Vatican has issued a formal decree to begin a process that will conclude with his recognition as a saint. 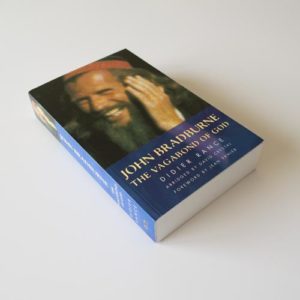 John Bradburne — The Vagabond of God 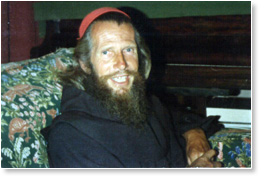 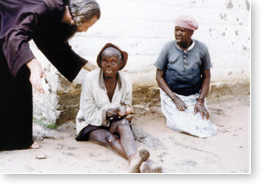 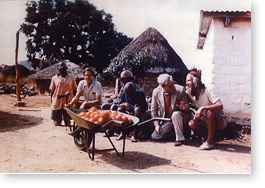 John with friends at Mutemwa