The opening of the Cause of John Bradburne took place on the 5th September at 12pm at Mutmewa leprosy Catholic Care Centre.

The mass was celebrated by Archbishop Ndlovu and concelebrated with 5 of the Bishops from Zimbabwe who signed the document to start John Bradburne’s Cause for Beatification in Zimbabwe. There were over 400 clergymen and wo 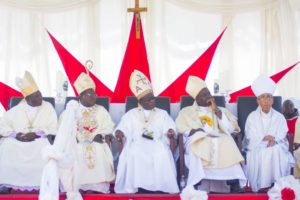 men taking part in the mass with a huge procession gathering prior to mass.

There were huge tents arranged around the main stage where people from all over the world came to celebrate John Bradburne’s life. Estimated over 15,000 people gathered at Mutemwa for the event.

who was a close friend of John’s) asked permission from the Archbishop to officially start the Cause of John Bradburne’s beatification.

The homily was given by Bishop Mupandasekwa who talked very openly about his experiences with John in his sermon, below is his homily:
Today we are gathered here for the cause of John Bradburne, this process starts by the postulator seeking information within the people.
John listened to the voice of the most high and refused to be in his comfort but was sent and listened, he was obedient. What he did in faith, hope, and love he did with sincerity, John managed to catch as many fish.  Some of us come here today just to satisfy our curiosity, for whatever reason we’re here, we leave not the same.

I personally witnessed the miracle of the dancing sun.  John and his friends changed Mutemwa from a place

of those who are cut off to a place where lives are being healed.
Let me make reference to the passage of St Therese the little flower to that of John.
John had this insatiable desire to be a Saint,  just as that of St Therese, his desire is what we are praying for now, God cannot inspire desires that cannot be fulfilled.

John was expelled from Mutemwa because of his generous nature to the patients, he refused to permit that lepers be known by a number as prisoners are, “they’re people he said”. When we look at Johns life at Mutemwa,  he was a man of heroic virtues. He loved deeply the people who where cut off and this was his strength.

We have books that we live and cherish yet we don’t use them. We do not pray using them, but here is a man who was of prayer. Prayer is the virtue that gives us courage to stand during difficulties. Standing on the foot of the cross was the Virgin Mary, she was standing in prayer.

John proved that the Fransiscan spirituality can be lived by a third order, he did not only become a channel of peace in his life but even in his death.

Readings were done by Sister Margaret from Missionary Sisters of the Precious Blood who read Colossians 1:9-14 and Kate Macpherson, John Bradburne’s great niece who read 2 Timothy 4:6-8.

The mass went on for 3 hours, with singing and praising by the wonderful Archdiocese of Harare dancers and choir.

At the end of the Mass, Archbishop Ndl

ovu’s Ecclesiastical Court he has formed were called to sign a secrecy document who will be part of the team going forward with John’s Cause.
Next is the process of calling all the people who JBMS and the postulator have interviewed over the last year, with testimonies of John are put in front of the Ecclesiastical Court both in Zimbabwe and the UK. Then a large document is compiled with these testimonies and sent to the Vatican. On approval of this John will be deemed Venerable.
It was a momentous occasion for all who came to the opening of the cause, John’s presence and love was definitely felt there at Mutemwa and the members of JBMS who participated in the event felt very honoured to be part of such an occasion.

Keep up-to-date by receiving our newsletter:

JBMS Mass, lunch and talks at Buckfast Abbey in Devon

If you’d rather recieve our newsletter via post, please complete and submit the form below.